Insights from our Alumni: Eve and her work at The Anti-Corruption Organisation Hi! I am Eve (Tanyakorn Thippayapokin), a former Social Policy and Development (SPD) student at Thammasat University in 2020 and a current Master's student under a Chinese government scholarship in International Public Administration and Policy (IMPA) at Renmin University of China. During my final semester in postgraduate school, I successfully completed my dissertation and I have just started my first career in the role of a project coordinator at Anti-Corruption Organisation (ACT), supervising the internationally-recognized Infrastructure Transparency Initiative (CoST) in Thailand.

It is undeniable that corruption is a major issue in Thailand, and I have witnessed this deep-rooted problem since I was a young child, particularly in the education system. Even though corruption has been on the rise in the country, there are still many people who have a positive outlook in the sense that corruption is not always bad and that we should work with it. However, as human beings, we can never escape from the fact that corruption is actually a dangerous thing that could damage our society.

Corruption, particularly in the public sector, is one of the most serious concerns impeding a country's development. For this reason, I believe we should accept the fact that it exists, and acknowledge ist numerous negative consequences including the undermining of public trust in government as well as the rule of law, limiting economic growth, wasting public resources and money, inefficiencies in operations, and so on. Accordingly, it is important to recognise corruption for what it is, which is an unacceptable deviation from the ideal moral standards of societies. When we consider corruption as a social problem, it becomes clear to see that it is an issue of public governance, which includes the policies, institutions (i.e. laws, regulations, etc.) and practices that shape and govern the community. Thus, by addressing this concern, it is only through clear

I am very excited therefore to work as a CoST project coordinator at ACT. I am here to use my skills and knowledge to help promote and encourage anti-corruption activities.

The CoST initiative, supported by the UK Government and the ASEAN Economic Reform Programme through the UNDP Project “Promoting a Fair Business Environment in ASEAN”, aims to develop a system for gathering, evaluating and disseminating information of state-funded public infrastructure construction projects from government agencies to ensure the openness and cost-effectiveness of the public investment in accordance with the Public Procurement and Supplies Administration Act, B.E. 2560 in Thai communities. The project is considered as a significant tool designed to support and facilitate the implementation of the Act, as well as to enhance transparency and accountability of the State agency in the public investment process, to help the community to participate in the process in a fair and efficient manner.

As an important step in supporting the true openness of infrastructure projects in Thailand, ACT works on the establishment of an online platform, which is based on international standards, called "Build Better Lives" (https://costthailand.org/) for transparent, effective, and fair provision of the simplified data from government agencies collected by the Assurance Team and the Comptroller General's Department for the development and implementation of an anti-corruption framework in a sustainable manner. The website is accessible to citizens and can be used by local administrations as well as private companies to be aware of current infrastructure projects that are being carried out. It is considered as a critical element of the system that facilitates the transparency and accountability of the State agency and contractors.

ACT aims to create this platform as an enabling environment for a community-based, collaborative approach to infrastructure development, where the government plays a facilitating role in the development of infrastructure projects while the civil society acts as the primary driver to express their opinions and complaints by establishing public forums. The platforms are made available for any members of the local community, whether government, civil society, or the private sector. This will build a better quality of life for the community with an objective that is considered as a benchmark by the ACT. It is hoped to achieve an improvement in infrastructure development in Thai communities by encouraging the collaboration of people and community organisations and increasing the visibility of the infrastructure projects to the society.

I am passionate about my current career path and feel strongly that I have a clear sense of purpose and mission in my work. I am driven by the power of the people because I believe that an essential aspect of democracy is empowering people to be active participants in shaping their lives and their communities. It is my hope that this project will help empower Thais to be active participants in government decision-making and to ensure that the government's efforts are focused on the well-being of all citizens and not just its own self-interest. To me, this is a fundamental value that I believe in, and it is my passion to make a difference in peoples' lives. With this project, I aim to help promote a culture of accountability and transparency in state-funded public works and infrastructure development. I love to contribute to my country, and I would love to continue to dedicate myself to learning and growing my career in this sector. 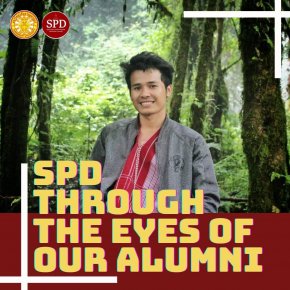 SPD Through the Eyes of our Alumni by Saw Thein Soe SPD Alumni Series 2021 - SPD Through the Eyes of our Alumni